In the old days, when wishing still helped

A wide open bog, dominated by mold and rot. Treacherous brackish marshland where one false step means death. Unruly undergrowth and gnarled trunk skeletons dominate the landscape. Gigantic strangler tendrils climb moldy trees, in whose hollow bodies all kinds of worms and beetle brood cavort. Predatory fish lurk in the muddy rivers and scavenging reptiles doze on damp banks, waiting for prey. Innumerable diseases thrive in the water and in the corrupted soil and eventually accumulate highly concentrated in flora and fauna. Colorful birds lure visitors to soft ground with bell-like chanting, only to pounce on the helplessly sunken and gently slurp out their eyes.

Nature in the Swampmarshes is calmly cruel. It is characterized by a primeval beauty that slowly mutated into the abominable in the course of poisonous centuries. An eternity passes in an instant, while the circle of life continues to turn ever faster with grinding mouths and traveling claws in microscopic variety. Here you will never be worth anything. For your existence is too short to compare yourself to this primeval force of the elements. At most you can endure it. Learn to understand it slowly and adapt your life to it. Get along with it.

In the past, the Swampmarshes were a wonderful source of life. A place of natural beauty and wild grace. In these long past eons, one could still go for unhindered walks as long as one chose his steps with care and respect. 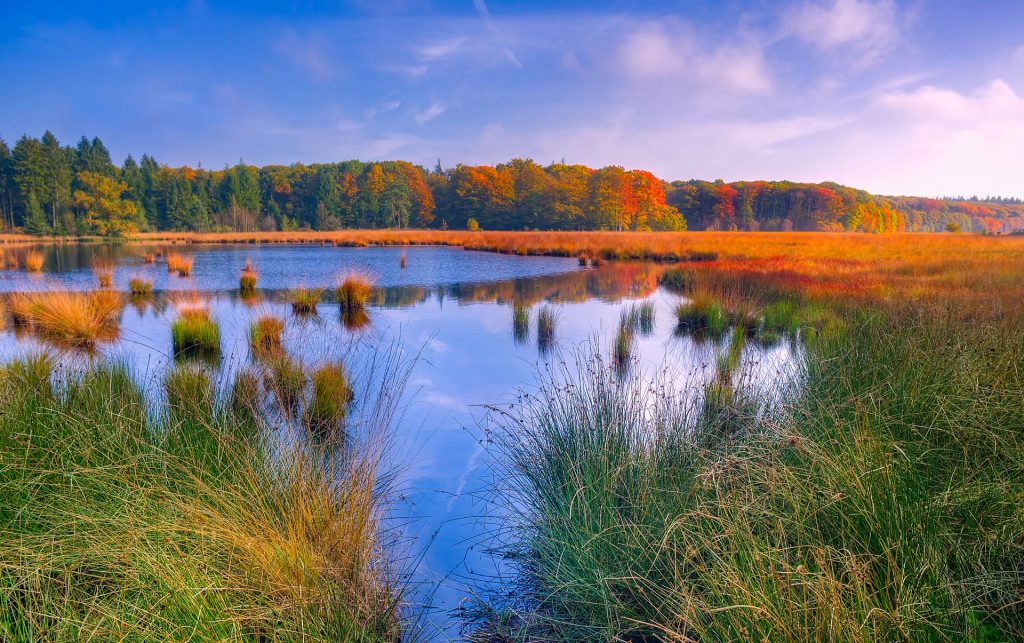 But then the Toad King came from the depths of the Poolpond and with him a whole army of civilized beasts.
His aim was to occupy and rule, and so his troops roamed the wilderness and burned down everything that defied them. But there was enough of it and many things stood against them. The marshes defended themselves.

The king of the Poolpond faced defeat. Despite his technique and his zeal, he could not fight the primordial nature. In sheer malice, however, he ordered machines to be built so large that they towered above the highest treetops and so loud that they drowned out every animal cry. And these machines produced the most disgusting filth and pumped it into the marshes. Day in, day out, the giants of silver and glass spewed their poisonous slime into the water. Similarly, pointed towers of iron were built, stretching up into the sky, threatening to impale the clouds. They sent out buzzing sounds so low that they could not be heard. They were only subliminally perceived, in the deepest innermost part of one’s being.

Nature wanted to fight back, but with every attack those animals and plants that came into contact with the slime fell more into madness. First they only died, then the first began to mutate. Many hundreds of species disappeared completely and those that remained were only an inverted image of their former form.
Nature had lost. But so had the Toad King. The more poison he released, the more aggressive and wild the marshes became and the harder it became to control them. Worse still, his own entourage and even he himself were not spared the slime. The once shimmering green bodies became ash and pale, the blood in their veins thick and their skin covered with warts, hard and brittle.

Even today, the descendants of the Toad King still rule over the Swampmarshes. But only by official decree and by means of special individual tax collectors. For no-one can truly rule over the endless miles of muddy wasteland. Every outpost and every village decays after some time. A normal settlement in the swamp marshes seems impossible. Only the colossal cities of silver and glass, which were created from the old, now silent machines, can resist the wild nature. But even those who live too long in the marshes change. The sludge of the old days still dominates the water, the land and everything that lives on it. 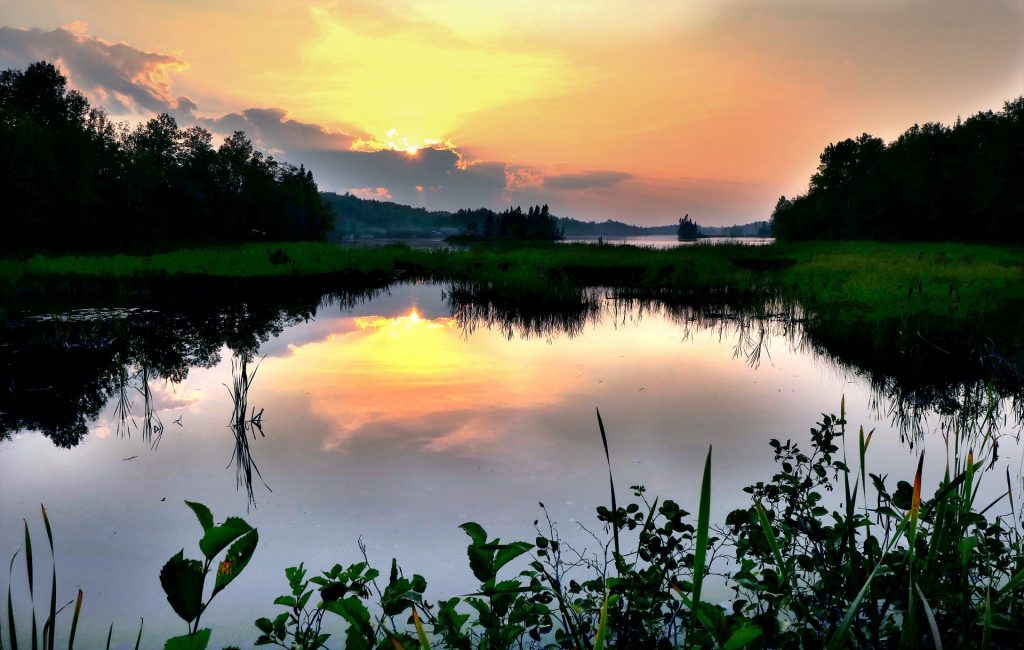 It is said that down in the Poolpond, at its deepest point, the former, monstrously mutated Toad King still wanders through the halls of his burial place. His sword Zarafrima, which is said to have been wielded by the gods themselves, is stuck in his back. Whoever pulls it shall become the rightful ruler of the marshes and break the eternal poisonous curse.

A golden ball was her favourite plaything

The wild beauty of the Swampmarshes, which sometimes flashes forth from the rough mutated creatures, seems very attractive to some individuals. The marshes themselves have a certain appeal too. They are deadly and graceful at the same time. There is a certain elegance to the ruthless struggle for survival. Similarly, the murderous proliferation seems so asynchronous that an educated eye may in turn recognize a symmetry of lethality.

All this occasionally beckons potential artists, poets and thinkers who, in search of great leisure, venture into the Swampmarshes. They are lured by the call of the wilderness. And by the fame that seems to come to anyone who makes it out of them again safely. From those who have spent some time in the midst of omnipresent death, the most magnificent artistic works seem to come. Yet it is a daring game. Only a few survive.
In many places they form small communities. Smoking, drinking and philosophizing in secret settlements. But nothing survives in the marshes for long. At some point, even these will be taken over by nature again. Usually, however, physical evidence is left behind. Paintings, sculptures, whole crude buildings of extra-worldly elegance. The swamp marshes are littered with past artist enclaves.

Three iron bands around his heart

There are witches. Literal, crooked, long-nosed, green-skinned witches. They live in the Swampmarshes in tree house networks that can span miles. The number of members in each coven is always a prime number. If there are too many, the coven sends some witches on great journeys. Little by little they gain fame for their profession or sometimes even establish their own communities. There is always a clear hierarchy within each coven, which is strictly followed.
To invite a witch into one’s own house brings a good omen, so they say. Usually one asks for their advice about the plants, herbs and mushrooms of the country. Many a king has only survived through the intervention of an undeterred witch.
Sometimes one hears of criminal associations of fallen witches who turned against their brothers and sisters. They are said to have aligned with the slime and made a pact with it.

In their huts they operate living ovens of blue flame, which must never go out. They obtain their fuel from innocent souls, which they buy legally in the silver towns in exchange for powerful artifacts. On their anvils of sand and clay they form all sorts of mundane and unnatural objects, each serving a different mad purpose. Why they do this is known only to them, although some rumor of fate and worldly infinity abound.

Then she became bitterly angry and threw him against the wall

Many mutated creatures nowadays call the Swampmarshes their home. But none are as well-known and dangerous as the one that is slowly threatening to take over.
The Kingdom of Glass. This is the name given to those regions surrounded by great burnt-out trenches. These were created by the local population and are only there to stop the contamination from spreading further.

Imagine a fox. Now remove the skin, let the flesh disappear and the bones become transparent. Then you have a good picture of what happens to you when you get the glass plague.
You will become vitreous and brittle. Transparent and clear. Clothes only help for a short time. After a day, they’ll be like you. Almost see-through. Every time you touch anything, you spread the disease. Even plants can be affected. Everything that lives and breathes. Leaves get cold, trees get hollow, and bugs get too heavy to fly. Yet everything has to eat and drink.

Those affected by the glass plague, you can watch them digest. All their bodily functions are exposed. There can be no more secrets. Everything shimmers and glitters in the sunlight.
No one is immune to it and healing only works in the first stages.
Yet you still keep your mind in the process. Most of it, anyway. Anyone affected by this will, after a while, fall into a pensive rigidity. As the days go by, you can watch their brains working. Literally. Afterwards, random euphoria erupts with new violence. Every infested person wants to make it clear to you that they have been healed. And you are the sick one. They say that covering up is unnatural. The only way to achieve higher reality is to see through to the outside. To something brighter. A society without prejudice or hatred. Then the infested will usually try to lunge at you and gnaw your skin off.

Prepare your silken bed where we will sleep.

There are very few who live outside the silver cities. However, a small, secretive group has found a home in the wilderness.
Not much is known about the marsh rangers. Selected ones have seen them in time. Usually in moments of great need and despair, especially when nature is in danger. Fortunately, they also include humans in their list of this nature. 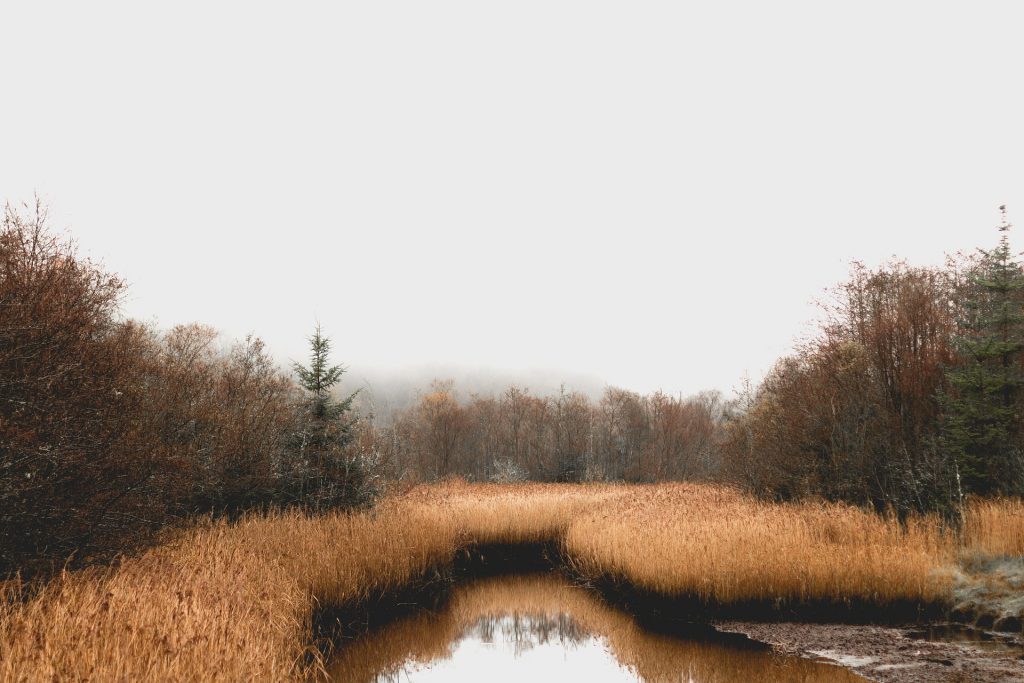 In the legends of the Poolpond they are sometimes described as forest spirits. As vengeful souls who punish anyone who stands in their way. Grey creatures dripping with slime and poison. Grimacing faces and mad expressions, rabid and quick as lightning.
Woe to those who arbitrarily harm their surroundings and disturb the shaky balance. The last thing such a person usually sees is the bent stick and the ash-grey blade of a wooden dagger in their own chest.