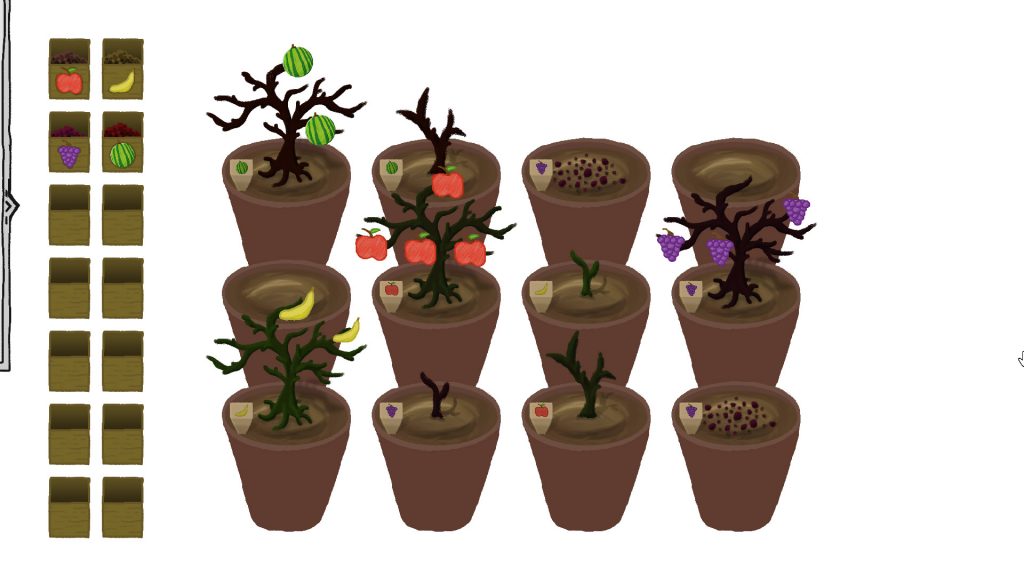 After finally being somewhat satisfied with the mechanical content of the operation interface (the smoothie making part), I finally started to work on the plant screen.
And things progressed pretty fast! Not much to do here at all, at least for the first version of the game, which I am trying to reach.

As you can see in the screenshot, on the left side we have some seed boxes that get filled with the seeds you buy at the shop screen. If they run out, they will appear empty. Every seed has a kind of distinct color to tell them apart from others.

At the end of the game, you can have up to 12 pots for planting fruit. The first row will be already unlocked at the start.
Every plant will have a different length of time they need to grow and until they carry fruit.
Once they are fully grown, They can carry from one up to six fruit. Those can also be three kind of sizes.
The fruit will stay on the plant, as long as you don’t pick them. If longer they are still on the plant, the bigger the chance that they will grow another size.

For storage, I just used the same code as in the operation interface, just with a bit of added code for the seedboxes to interact correctly. When you pick a fruit, you can just carry it over there, plop it in and you can access it while making smoothies. Though you have to be careful, once off the plant, the fruit will rot a couple of days later.

Next week I will probably already start on the shop interface, which I plan to make up like a website you watch on a computer screen, that you can buy upgrades and other stuff from.